An AI advisor for your messenger

Skip the process / Go to Design

“The goal of the Natural Language Processing (NLP) is to design and build software that will analyze, understand, and generate languages that humans use naturally.”

We want to create a way in which natural language processing and machine learning could improve an already existing task from a design perspective. We studied numerous examples of these processes being used in all types of Internet-based industries. What stood out to us most in comparing the different types of machine learning tasks (from synthesis to summarization to search, etc.) was their common thread:

"Performing actions based on datasets that are too large for humans to parse through."

Ultimately, an expert human will understand their own preferences enough to make the right decision; however, given large amounts of options and potential conclusions, it can be very difficult for anyone to make sense of the information that’s presented to us.

Therefore, how can AI help people?

It's easy to think of Yelp when I am thinking about large data sets and language. Once in awhile, I check Yelp to see if there are any good restaurants to try with friends.

Figuring out where to eat isn’t just time-consuming, it’s also inefficient. Between two people, making plans can be a huge hassle, because there are too many steps involved with making a decision.

Planning a meet-up occurs in a single conversation, but virtually, it involves at least three separate app environments, including messaging, calling, navigating, using Yelp, and more. Furthermore, if these apps don't communicate with each other, there is often overlap in the data entered.

Therefore, we want to design something that can access all the information you need to get from planning to doing by simply having one conversation.

To begin with, I first sent out surveys to see if people were having problems scheduling a meeting and how would they use Yelp in this process.I got 45 responses, most from college students

From the responses, I drew the following conclusions: 1. Most people only look at the ratings and pictures on Yelp. 2. People are more likely to go to restaurants they have already been to. 3. People are indecisive. 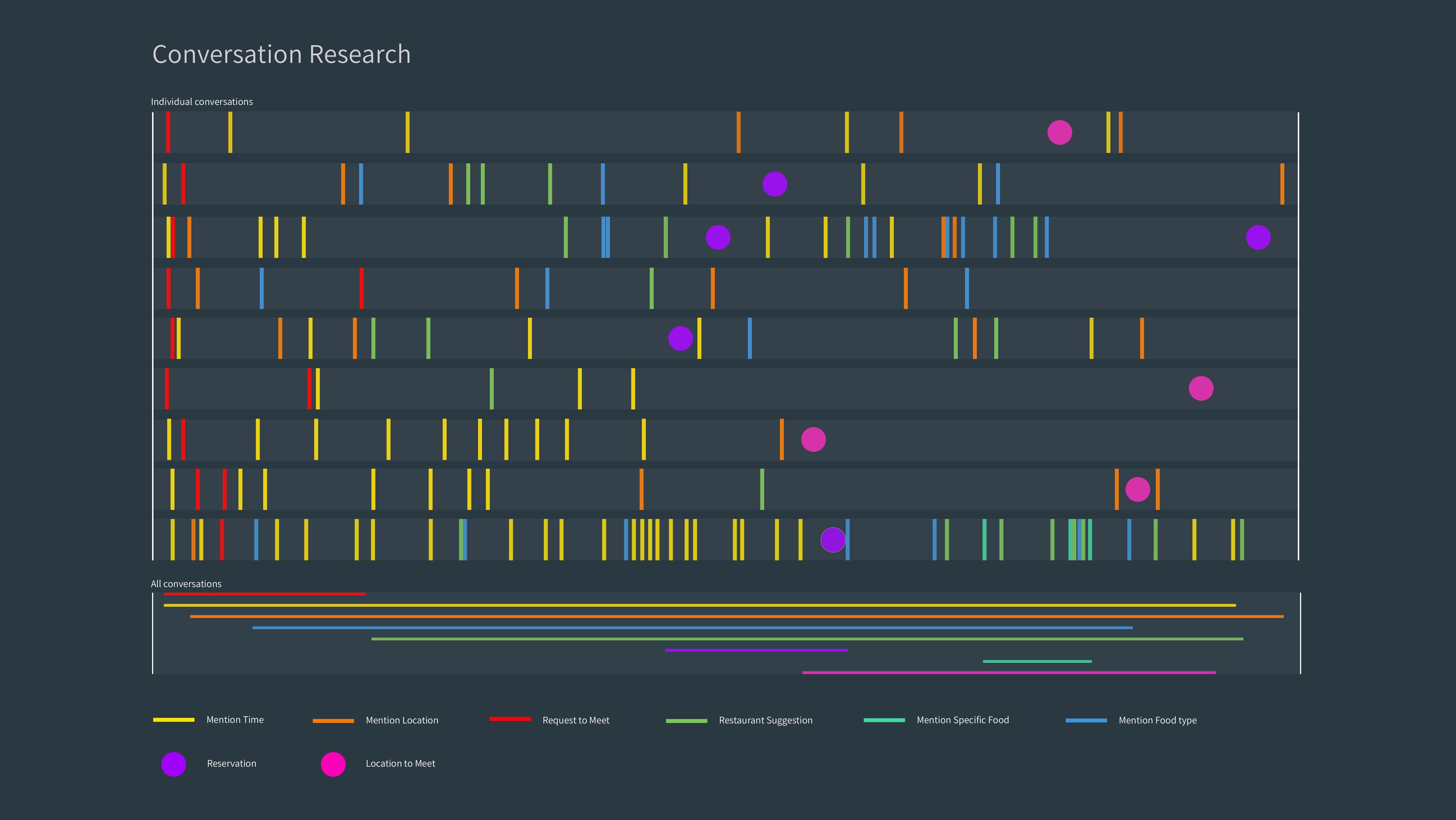 From this research, I find that a very explicit word relating to a meeting invitation usually shows up at the beginning of a conversation. Time is also being discussed in every conversation. It’s usually the first thing people discuss after they decide to meet. These findings create opportunities for NLP to pick up keywords and understand users' intention to meet base on the keywords and context. People also talk about the location of restaurants in almost every conversation. Sometimes they would narrow down their location to meet in a small area. Other times they are living relatively close to each other. By combining these different factors, NLP could recommend restaurants that are convenient for everyone.

The conversation research also helps us to understand how NLP can help people better. I find out that usually people recommend restaurants to others by either mentioning the names or sending Yelp screenshots. People also ask each other for recommendations, and sometimes there is lots of back and forth. If NLP could understand people’s intentions and recommend restaurants to them instantly within one app, people could save lots of time and effort in scheduling a meeting.

When enabled, Yelp Advisor uses natural language processing to read and parse through conversations happening in real time. An understanding of sentence structure allows Yelp Advisor to determine what information to keep track of in anticipation of a key prompt, at which point a red notification dot indicates that an informed search can be made.

Swipe through Yelp suggestions and change the search parameters if there are implicit filters that weren’t picked up through the conversation (dietary restrictions, kid-friendly, price range). Suggestions are ranked by learned data from both Facebook and Yelp accounts, weighing not just proximity but also similarity to places you’ve been to before. If you’re looking for something different, simply tap to load more suggestions.

We are interested in the potential for machine learning systems to help prune these large datasets down into smaller ones that can be easily processed by people. In this way, information becomes more accessible to users, but the users themselves are still the ones making the decisions.

Here are some other ways NLP thrid party plugin can help people:

*Yelp Advisor was a collaborative design mockup created by Jingru Guo and Jeremy Joachim. Special Thanks to Ivy Hu and ASAPP.